At this point, I was feeling rather discouraged, as the file format wasn't anything recognizable. I found a really nice site that explains the various flavors of ADPCM; but alas, none of them described the format I was seeing.

That left an exceedingly painful alternative: reverse-engineer the game and find the decompression code. While I do know MIPS assembly language (which the PS2 uses), debugging an unfamiliar platform is hell.

Next idea: talk to nameless programmer friend who programs, among other things, the PS2. I explained the situation, and asked if he thought it was remotely feasible to reverse-engineer the thing. He doubted it. However, he offered an opinion even more valuable: he suggested it might be VAG, a hardware format. Now that was a format I'd never heard of before, other than seeing it listed in the list of formats MFAudio supports. I smell an opportunity...

I whipped out a random WAV file and ran it through MFAudio (which can encode as well as decode). While the header was obviously different (for reasons I wouldn't realize till later), the distinctive data block structure was evident in the generated VAG file. 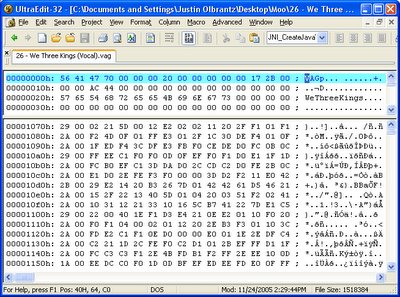 That left one thing to do, to confirm: to try to splice the AUS file data into the VAG file, and see if MFAudio could play it. I deleted the VAG file datnd pasted in the AUS data, and transplanted the AUS header fields to the VAG header, as best as I could guess what they were. The result: MFAudio played it; the length and sample rate were wrong (this was due to my incomplete understanding of the header fields of the two formats), but it played it, devoid of pops, clicks, or other distortions. This was a positive identification of the compression format.

Posted by Justin Olbrantz (Quantam) at 11:05 AM