As those of you keeping count have probably noticed, there hasn't been a whole lot of blogging from me, lately. There's a pretty intuitive reason for that. As I mentioned previously, Squid and I went to Kansas to work for the same company as Skywing over the summer. Skywing's boss (actually the chief technical officer) had invited me to work there out of the blue, while Squid was just bored, and thought out of state travel might amuse him. It came as a surprise, then, that when we arrived, the CTO told Squid that if he was bored and wanted to work for the company as a Q/A person (since his programming abilities aren't really enough to get by at an actual job) he could; only, they didn't have budget to pay him.

As Squid was in fact bored (that and the fact that, for technical reasons, he could only use the internet from the hotel room for the first couple of weeks while I was there), he decided to try working (a relatively new concept for him, although I don't suppose I'm one to talk). So, I worked on my (programming) project for the ten weeks we were there, and he worked for their Q/A "department" (actually only like 3 people, including him).

Well, it turned out that Squid was actually pretty good at Q/A, and at the end of the summer both of us were invited to stay and work full-time for the company, once they managed to find budgets for us (during the summer I was the only one getting paid, and only making an intern's pay). I declined, as I wanted to finish up my last 3 semesters of college (double majors, remember), though I expected to go back over the winter and summer breaks, and work remotely during the school semesters (maybe).

So, we came home, and I started school on August 22. A couple weeks after, however, we got a call from them, regarding some new funding. They wanted me to work remotely to finish the project I'd started during the summer (and wanted it done in three weeks!), and they now had budget for Squid.

So, there are a couple points to this story. First, I'm going to school full-time (taking the same number of units I was in the previous semesters; I also have two project and a term paper due within three weeks from now) and still working part-time, meaning I'm busier than I used to be (and Gord help me if I ever start playing WoW again). Though I'm not sure if it'll last; my project has to be done by next Monday, and I don't know whether they'll want me to work on anything else remotely after it's done (from what I've heard they don't usually let people work remotely).

Second, Squid has accepted the job, and is leaving (for good) on Thursday. I guess if his luggage doesn't explode this time (last time his carry-on suitcase set off the bomb detector), I'll see him around Christmas, if I go back to work there. Amusingly (and surprisingly), it look like his sister may move into his room in the house here, after he moves out. Unfortunately, I don't think she downloads every single anime episode that comes out, like he does (so that I could always just get whatever I wanted from him); oh well :P
Posted by Justin Olbrantz (Quantam) at 4:03 PM 2 comments: 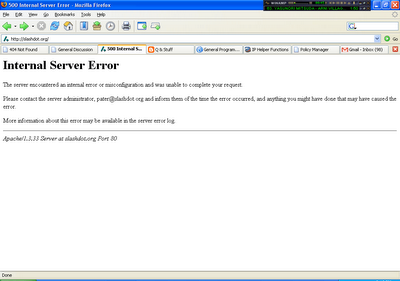 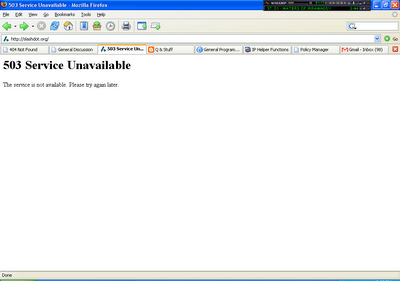 Q's Fact of the Day

Blast Processing was a marketing term coined by Sega to advertise the fact that the Sega Mega Drive/Genesis could calculate faster motion than the Super Nintendo Entertainment System and was generally taken by the public to refer to the main system processors. Strictly the term refers to a technical feature of the Genesis that wasn't replicated on the SNES - the ability for the CPU to be working on one visible section of map while the graphics processor displays another. Since only the visible part of the map is uploaded at any one time, this feature greatly increases the distance that the map can scroll from one frame to the next, but few if any people will have been able to discern that meaning from the advertising.

http://en.wikipedia.org/wiki/Blast_Processing
I always wondered what that term really meant.
Posted by Justin Olbrantz (Quantam) at 10:46 PM No comments:

This is Q's public service announcement of the... well, since whenever the last one was. Today I'm writing to warn you about possibly the most idiotic, incompetent bank in the whole world: Wells Fargo. This bank is so special that it's been charging me a monthly service fee on my free savings account (which I only opened because I needed one to get their student credit card, at the time) for several years, now. I've been over there four times to yell at them and tell them to fix it. The first three times it was "I'm so sorry, sir, I'll fix it right now." Lo and behold: bam, monthly service charge on the next month's statement.

Now, I'm not positive about what to make of the fact that the first three times I went there nobody mentioned a minimum balance. It could be that their bankers (the ones that have their own desks) are just absolutely clueless about how their bank policies work, and Gord knows what it was they "fixed" when they said they had done so; or, it could be that the minimum balance is a new policy (this is consistent with the fact that I have no recollection of any service charge, and I read all the account information before opening it, but I'm not absolutely positive that I haven't forgotten), in which case it wouldn't explain the first couple years of deductions.

In either case, go put your money into Nigerian banks, people; you'll get ass-raped less than with Wells Fargo. And do make sure to spread the word.

Posted by Justin Olbrantz (Quantam) at 9:32 PM No comments:

A few days ago, BZ made me aware of the fact that the World of Warcraft: The Burning Crusade friends and family beta was available for download on the WoW site. As one of the areas of my expertise is the MoPaQ archive format (used by all Blizzard games since Diablo), I immediately wanted to know whether there had been any additions to the format with this new release.

I walked him through all the places he needed to look for additions, as he already had it downloaded and I did not. No new flags in the file table, no new extended attributes. MPQDump reported that there were no new compressions methods in use, nor unusual "system" files. There were, however, 12 new bytes in the MPQ header; unfortunately, they were all 0 in all of the game archives.

To make a long story short, I spent several hours over Thursday and Friday looking at the disassembly and running the thing (the installer, to be specific) with a debugger; I couldn't actually watch the code that used the new fields execute, but I did watch the code around those areas, and tried to put the pieces together in my head.

Finally, I'd completed my analysis, and was ready to update my specs. But I couldn't help but want to verify that everything I'd figured out was correct; but how do you study something when that thing doesn't exist? Well, you make it, and see if it works. And thus began the experiment to create a recombinant MPQ.

How to test all of these with minimal effort, while eliminative false negatives and positives? Well, to me, the path of least resistance was fairly obvious: I spliced 4294967296 bytes of garbage directly after the MPQ header. This ensured that every file pointer in the archive would have to be altered, and shifted above the 32-bit file pointer limit present in older MPQs. Because it was exactly 4294967296 bytes, no existing pointers in the file (that is, the low 32 bits of the pointers) would have to be altered; the upper bits just had to be inserted, and they would always be 1. Thus, by simply splicing data there and setting the new fields of the header (two of three of which just needed to be set to 1), I'd knocked all of the three first items off the checklist. However, now I needed to add the high bits to all of the file pointers. This was accomplished simply by appending the proper number of bytes at the end of the archive (2 bytes per file) with the hex pattern 01 00.

But the real clincher would be the shunt. I had, I believed, figured out enough about the shunt to get it to do its thing. However, there were two values from the shunt header that the MPQ API saved in its archive data structure that I couldn't tell where they were used, meaning I couldn't tell HOW they were used. So, all I could do is set the value I knew what it did to what it should be and the value I didn't to 0, and hoped for the best.

After writing recMPQ, a program to perform the recombination on an archive, I ran the program on all three of the installer tomes (installation archives). What better way to verify my understanding than to use the recombinant archives as vectors and attempt a transfection?

I observed the experiment from WinDbg. As the archive was opened, I placed watches on the fields that the unknown portions of the shunt header were saved to, with the hope of being able to find the location of the code that was accessing them. Unfortunately, this failed; the fields were never observed to be accessed.

However, the recombinant MPQs worked perfectly - they were uptaken and their payload delivered without difficulty. Thus, the experiment was a success, and I updated my specs with (most of) the information I'd learned.
Posted by Justin Olbrantz (Quantam) at 4:27 PM 1 comment:

I updated my MPQ file format spec today, after pretty much completing my reverse-engineering of the Burning Crusade modifications to the format (which started on Thursday, after I found out that the BC beta was out). Also, the spec has a new home, now that CC has bit the dust (or at least the old site did) - on BZ's wiki.
Posted by Justin Olbrantz (Quantam) at 9:56 PM No comments: