And I'm back from the black belt test. Not exactly the portrait of the ideal martial artist, but I passed, which is what's important for the moment. Got some nice trophies; at least, they should be nice. My dad video-taped part of it, and took still pictures for other parts. Unfortunately, the digital camera he was using for the still shots doesn't really take pictures at a precise time (you can't expect it to take a picture within like 1/10 of a second after you press the button), so he wasn't able to get too many good still pictures; the slow shutter speed of the camera made for some sweet motion blur shots, though. I'm posting the four best still pics right now; none of them are of me doing anything (although you can see me holding boards in a couple of them): 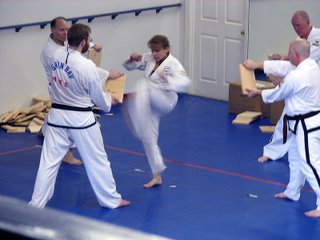 Awesome motion blur (the best of the 42 pics, in this regard). This is a four-corner break, where you do four separate attacks in quick, fluid succession, and usually with less boards than you'd do with each attack individually; this is a front snap kick with one board. I'm the one holding the board she's kicking. 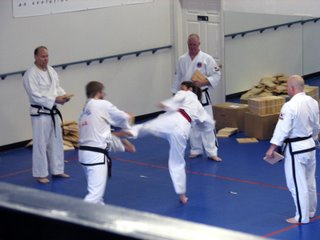 Another person's four-corner break; side kick with one board. Again, I'm the one holding the board. 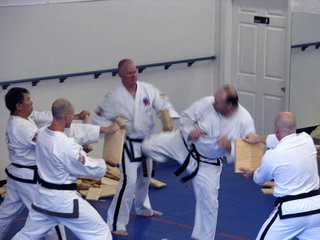 And another. Apparently this shot is the leg returning to the floor after breaking two boards with a side kick. By this point I was taking a break from holding, between the twice I got kicked in the fingers by one woman, and the fact that I'd just done my four-corner break and power breaks (several individual attacks with lots of boards). 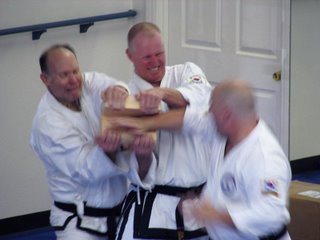 Three board power break with a middle knife hand strike. Both holders have pretty pathetic looks on their faces :P

I don't yet know how the video turned out; it looks like it's gonna take a fair bit of work to extract video from this thing with it's A/V out and encode it, and I don't really have the time to spend until like next weekend. But if it turned out well, there are three clips I want to post online: me breaking three boards with a punch, the master instructor (the 7th degree I mentioned last post) breaking seven boards with a back kick (awesome), and another instructor (the one who teaches at my school, 4th degree) breaking four bricks with a side kick (pretty cool looking).
Posted by Justin Olbrantz (Quantam) at 4:17 PM

One of these days I'm going to fly down to California again, take the time to find you, and cut you.

You can come down to LA, he isn't far. You can stay in my garage and plot.