So, Q was doing some price comparison on eBay, Amazon, and other places, with the intent of obtaining the aforementioned music CDs. While I was doing so, I happened upon an eBay listing of Blanc Dans Noir (the third Noir soundtrack) for $5.50. That quickly set off my bullshit detector, but it was still possible that this guy was simply selling these CDs at or below wholesale cost (improbable, but not impossible).

So, I needed proof that this was bootlegged. I first started by comparing the scan of the CD with the one on Amazon. The covers themselves looked okay, but the blisters didn't match; however, this also was not conclusive proof

I did, however, notice something distinctive on the eBay copy - the number KO-88241. This looked suspiciously like a product ID number - but whose? Some searching around revealed that it belonged to a company called K-O Records Ltd. Not the JVC Victor listed on Amazon, but still not quite enough.

The last piece of the puzzle was found by searching Google for listings of bootleg CD manufacturers. K-O wasn't listed on Anime Digital's FAQ (the first one I looked at), but Chudah's Corner identified K-O Records as a known bootleg company.

So, we've got a bootlegged copy of Blanc Dans Noir on eBay. Is that all? Nope. Looking at the person's eBay store, we can see a wide variety of music CDs for the same price. While I'm certainly not going to check all of them, a random sampling reveals they all bear the same KO- product ID on the blister. Looking at the number of comments this guy has received, it appears that he's been running a massive bootleg operation for quite some time.

As a humorous aside, while I was examining the covers, I noticed this from the scan included with the Blanc Dans Noir that I downloaded: 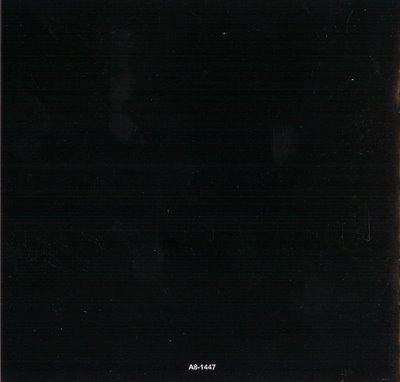 If you've been following my trail of investigation, you should be able to recognize that as an Ever Anime product ID - another bootleg.

UPDATE: While I was still conducting my investigation (and before I was convinced that the one on eBay was a bootleg, I sent this question to the seller:

I'm sorry there's no elegant way to ask this: this is a legal
(non-bootlegged) copy produced by JVC Victor (not Son May or some such),
right? The price just seems hard to believe, given that the retail price is
3045 yen.

Before I'd formed my conclusion I was expecting a reply; however, that expectation ended abruptly when I proved that it was a bootleg through other means. Much to my surprise, I found this waiting for me when I got home from technical writing class:

Hi, sorry this is the sonmay version. ~Jenny

Holy crap, did I hear that right? I wonder if she knows she's selling bootlegged copies; I can't imagine she'd have responded if she did.
Posted by Justin Olbrantz (Quantam) at 8:59 PM